A downloadable game for Windows

Elette Fragments is a story based beat em up game. You play as Benviolo, the axe wielding star of the play, as he solves the mystery of not just a missing jewel but missing colors in his home town of Lotte. It features a unique storytelling experience using the stage and Elette’s distinct hand drawn paper cut out style of art while not backing down on the actual beat em up style game play.

Elette Fragments tells many of the smaller stories from the characters in Elette and their life after the return of Hermielle. With each act, begin to piece together the mysteries that plague the island nation while experiencing fun and new mechanics that bring an old time favorite genre some new and exciting twists.

When a strange trader comes to the drab land of Lotte, it isn’t long before the townsfolk find their day to day activities thrown upside down. With the slightest glimpse of a magnificent blue gem, the citizens of Lotte are thrown into a frenzy only to have the gem taken before their very eyes. Our heroes, Benviolo and Mathias Tillington II are paired with the eccentric trader as a deeper plot surrounding the loss of colors from the nation begins to take shape.

A musty journal, unfinished research, and a powerful artifact. In the chance to uncover the mysteries surrounding the loss of color from the Nation of Lotte, Juliet stumbles upon notes left by her late mother. All signs point to the mystical Monocle of Mortimer, a gift given to Hermielle, which legend states can control Spectra in untold ways. In what will become a quest that hits close to home, she must unite with an unlikely ally to uncover a hidden truth.

Why is it called Fragments?

We expect Elette Fragments to tell many of the smaller stories from the characters in Elette. This means the game will be updated every so often with a new story/play and new features and mechanics to go along with it. For example, we currently have 1-2 small mini games during the acting scenes, and we to expand on that, making the acting scenes not just the way you experience the story, but their own fun and engaging mechanics. We will also be adding new characters, items and powerups, and blocking/dashing to the combat engine (actually, we already added this!).

In order to download this game you must purchase it at or above the minimum price of $4.99 USD. You will get access to the following files:

Support this game at or above a special price point to receive something exclusive.

The first ten people to get this reward will be sent custom art in Elette's signature hand-drawn paper cut-out style. You will be contacted to ask about what sort of character you would like.

The first ten people to get this reward will be sent custom art with poetry in Elette's signature hand-drawn paper cut-out style. You will be contacted to ask about what sort of scene you would like.

I took a look at Elette Fragments and I'm impressed how good game you have here. I'm not the biggest fan of web based games since the earlier days of flash. But you show how good games for the web can be. Nice to see you going with HTML 5 and not Flash. Flash might still dominate the web game arena but with developers like you, it gonna change.

Elette Fragments has a good story going for it. Strong beginning and good development during the gameplay. Fun concept for a beat em up game to see everything as a big theater and an active audience. Nice to see the workers active on the scense and all characters as cut out figures.

I see a good game and hope you gonna continue on this story and the system. Ex more variation in music for the scenes. When it came to the battle system, I felt that the range attack were the only useful attack in the game. Escpecially when  the enemies group up against you. Maybe do something there so the other attacks becomes more useful. So I hoping for more variations of attacks and weapons as you mentions in the description.

Awesome game and keep up with the development of these web based games. The future looks bright. 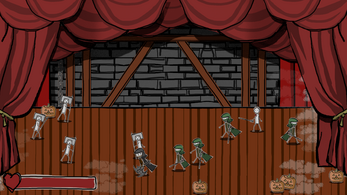 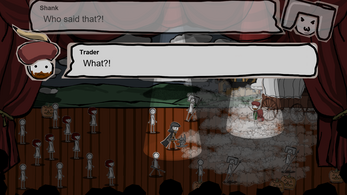 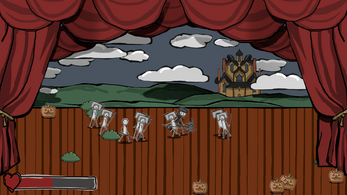 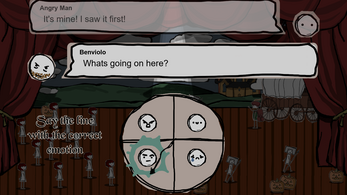